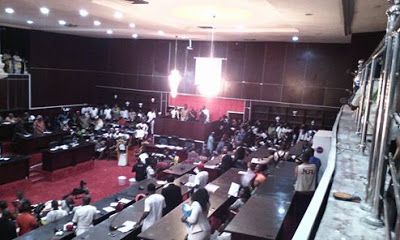 Gunmen suspected to be armed robbers attacked the Imo State house of Assembly complex situated in Owerri, the state capital, carting away valuables, office equipment, electronics and other vital documents.

Reporters learnt that the latest attack was the third in 2017.

A lawmaker, Emma Orie, who represents Ohaji /Egbema state constituency told our correspondent on the phone on Wednesday, that his office was not burgled during the armed robbery attack.

He, however, said that the offices of three of his colleagues, Mike Iheanatu (Aboh Mbaise) Uche Oguwuike (Ikeduru) and Uche Agabiga (Orsu) were robbed by the gangsters.

An Assembly source, who preferred to be anonymous, said that the hoodlums gained access into the offices of the three lawmakers through the ceilings at night.

According to him, it was when the staff members attached to the lawmakers resumed for work in the morning that they discovered that the tables and chairs had been turned upside down, and computers, documents, television sets and other valuables had been stolen.

When contacted, the Chief Press Secretary to the speaker of the house of Assembly, Ben Ilochonwu confirmed the development and said that the hoodlums only stole electronic sets and gadgets from the lawmakers’ offices.

When contacted for reaction, one of the affected lawmakers, Iheanatu, dropped the phone on our correspondent immediately he introduced himself to him.

The spokesperson for the police in the state, Andrew Enwerem, could not be reached as of the time of filing this report.