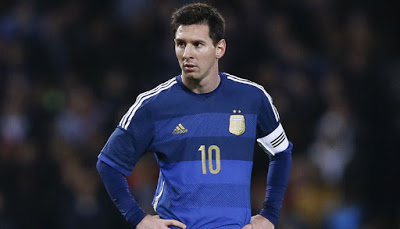 Lionel Messi’s four-match ban for allegedly insulting an official in Argentina’s World Cup qualifier against Chile has been rescinded by FIFA following an appeal.

The Barcelona forward had been banned from playing in their subsequent qualifier against Bolivia, which the World Cup 2014 finalists lost.

“The FIFA Appeal Committee has upheld the appeal lodged by the Argentinian Football Association, on behalf of the player Lionel Messi, against the decision taken by the FIFA Disciplinary Committee, lifting the sanctions imposed on him as a result,” FIFA said in a statement on Friday.

“Despite the fact that the FIFA Appeal Committee considered Lionel Messi’s behaviour as reproachable, the former concluded that the evidence available was not sufficient to establish to the appropriate standard, i.e. to the comfortable satisfaction of the members of the Appeal Committee, that art. 77 a) of the FDC, according to which the Disciplinary Committee is responsible for sanctioning serious infringements which have escaped the match officials’ attention, could be applied.

“The Appeal Committee nevertheless underlines the importance of always showing respect to the match officials, stressing that such a principle is essential in football and any unsporting conduct that may be contrary to the principles of fair play cannot be accepted.

“In view of the above decision, the suspension for four matches imposed on Lionel Messi, which entered into force on March 28 2017, and the fine of £7,800 have been lifted.”

Messi had strenuously denied wrongdoing following the initial ban and vowed to fight the charges with Argentina’s World Cup qualification hopes hanging in the balance.

“I vehemently deny having offended assistant referee 1 during the game against Chile, and more so do not believe that my conduct falls under article 57 of FIFA’s disciplinary code,” he said back in March.

“One of the assistant referees, of Brazilian nationality, perfectly understood what I was saying, so much so that we spoke amicably and at no time did my words offend or insult the official.

“If any of my words made assistant referee 1 uncomfortable, they were never directed at him but rather to the air and for that, I apologise.”

Messi will now be available to Argentina for crucial qualification fixtures against Uruguay, Venezuela and Peru.

He will be looking to help nudge his nation up the CONMEBOL table in those games, with their current fifth-placed standing only good enough to secure a play-off berth.

It could be that Argentina are under the control of Jorge Sampaoli by the time they next take in a competitive fixture, with the highly-rated Sevilla boss having been offered the opportunity to succeed Edgardo Bauza.