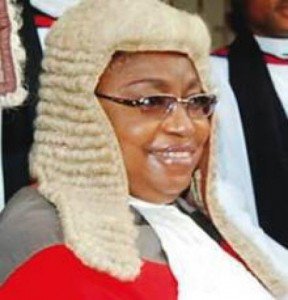 A retired Nigerian Judge, Ayotunde Phillips, has been appointed into the newly-constituted FIFA Ethics Committee at the Congress of the world football governing body taking place in Manama, Bahrain.

The 68-year-old who studied law at the University of Lagos, was called to the Nigerian Bar in 1974 and spent her compulsory National Youth Service Corps year in the then East Central State of Nigeria.

The new FIFA appointee was the fourth female Chief Judge of Lagos State.

She retired from the High Court Bench in July 2014 upon the attainment of the statutory retirement age of 65 years.

She had by then served the Lagos State Government for 38 years out of which 20 years were spent on the High Court Bench.

Justice Ayotunde was the Chairman of the Lagos State Independent Electoral Commission until her latest appointment.

The Nigeria Football Federation has already congratulated her.
The Federation, via its Twitter account, wrote: “Congratulations to Nigerian Judge, Justice Ayotunde Phillip who has just been appointed into the FIFA Ethics Committee.”