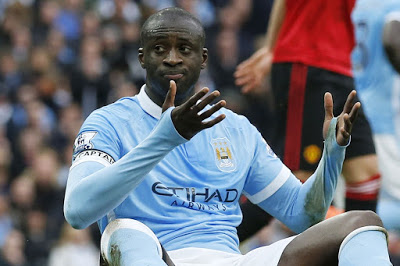 Yaya Toure has hit out at refereeing standards after Manchester City’s controversial FA Cup semifinal loss to Arsenal on Sunday.

Toure was angered after referee Craig Pawson ruled out what seemed a good first-half goal for City as they were beaten 2-1 in extra time.

Sergio Aguero thought he had scored but the effort was chalked off because Leroy Sane’s cross was ruled to have drifted out of play.

Replays indicated the decision was wrong, while Aguero also thought he should have had a penalty early in the game.

Toure said: “I think the referees have to stop this. I am very disappointed. It is not the first time — there have been a couple of times.

“If we have to talk about referees, people are going to say we complain — but when we see the highlights, it is very disappointing.

“Maybe on Thursday [for the Mahcester derby at the Etihad] we are going to have a better referee or maybe play without a referee — I’d prefer that.”

Asked whether he thought the ball had stayed in play for the disallowed goal, Toure said it “definitely” had and was adamant that Aguero should have had a penalty.

City’s attention now turns to Thursday and a derby that could have a huge bearing on the battle for a top-four finish in the Premier League.

Pep Guardiola’s side currently occupy the fourth Champions League position, with United just a point behind.

Toure said: “It is a very big game, an important game. We have to do that job and we will see what can happen.

“We hope we are going to have a good referee.”