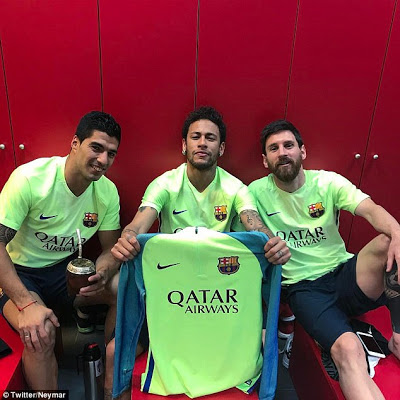 Luis Suarez, Neymar and Lionel Messi rubbed salt into the wounds of Real Madrid by recreating the Argentine’s celebration the morning after Barcelona’s stunning win.

Messi popped up with a dramatic last-gasp winner at the Bernabeu on Sunday night to seal a thrilling 3-2 La Liga victory.

In the aftermath of that sensational goal in Madrid, Messi ripped off his shirt and showed it to the home fans as the jubilant Barca supporters celebrated.

And the trio made sure they reminded their rivals of his iconic goal, which was his 500th strike for Barca, by recreating the celebration ahead of training on Monday.

Meanwhile Suarez led the tributes to Messi after he scored the 500th goal of his club career to give Luis Enrique’s side a last-gasp 3-2 win over 10-man Real Madrid.

Messi struck twice in a dramatic victory to take Barcelona to the top of LaLiga.

Ivan Rakitic was also on target for Barcelona, while Casemiro and James Rodriguez – the Colombian having equalised in the 85th minute – scored for hosts Real, who had captain Sergio Ramos sent off for the 22nd time in his Madrid career in the final quarter.

Ramos received an El Clasico red card for the second successive season 13 minutes from time. Messi was fortunate that the Spaniard’s two-footed challenge did not make contact with him and that he avoided serious injury.