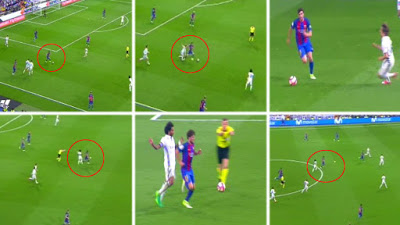 Real Madrid vice-captain Marcelo has said he regrets not fouling Barcelona’s Sergi Roberto at the start of the move that resulted in Lionel Messi’s last-gasp winner.

Messi’s second goal of the game, steered home in the dying seconds, secured a 3-2 win for Barca in a thriller at the Bernabeu.

The move began when Sergi Roberto surged from his own half, running 50 yards before the ball was worked to Messi, who curled it home to put Barca top of the table on their head-to-head record over Madrid.

Speaking to reporters after the game, Brazil international Marcelo said: “In the end if I make the foul, a technical foul, on Sergi, maybe they do not score the goal, although it is impossible to know.

“Many things happen in seconds — it is very difficult. Maybe I take the blame, there is no problem with that. If I make a foul, they don’t score the goal.

“It is not just about Marcelo, it could be any player — although the further the ball is from our goal the better.”

Madrid were angry with the decision to show a straight red card to Sergio Ramos for a lunge on Messi with the game in the balance, and Marcelo said it had been a major factor in the result.

“In the end, some mistakes and small details have made the difference, not just the counter-attack,” he said.

“I don’t give my opinion on referees, although a sending off affects a team.”

But he stressed that Madrid remained in a good position to win both the Liga title — they have a game in hand on Barcelona — and the Champions League.

“We don’t get carried away when we win and we won’t get down after a defeat,” he added.

“We did a great job and we go away with our heads held high. We’re well placed in two competitions and we’ll keep working as we were before.”

Madrid forward Cristiano Ronaldo missed a clear chance from close range with the game deadlocked at 1-1 midway through the second half.

TV images also showed that a frustrated Ronaldo felt Marcelo or another Madrid player should have done whatever was necessary to stop Barca from mounting a counter-attack so late in the game.