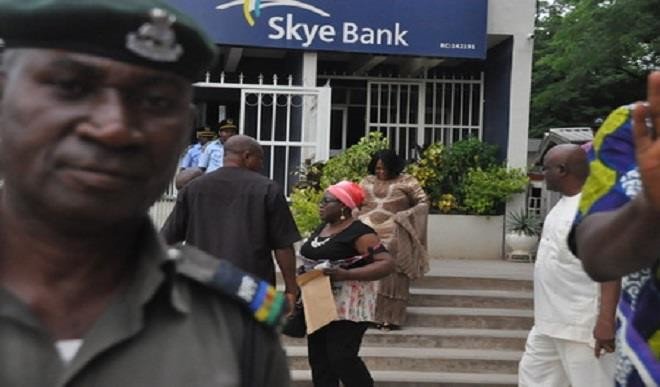 Former Nigerian First Lady, Patience Jonathan,  on Monday visited the Maitama branch of the   Skyebank in Abuja to withdraw part of her $5.9million recently unfrozen by a Lagos High Court.

But she met a brickwall.

The Economic and Financial Crimes Commission had procured a stay-of-execution of  the judgement and also simultaneously filed an appeal against the judgment given last week on 6 April by Justice Mojisola Olatoregun,

News spread quickly that she visited the bank on Monday, following another visit on Friday 7 April. Unconfirmed reports said that she wanted to withdraw as much as $1million, but was given $100,000 by the bank.

She returned at 10:00 a.m. and had a closed-door meeting with an Executive Director of the bank.

She finally left the bank at 4:05 p.m. but declined to speak to newsmen who sought to know why she was there.

One of her aides, who declined to disclose his name, told newsmen that “everything was okay”.

A Federal High Court in Lagos, on Thursday vacated its order which in 2016 froze the Skye Bank account of the ex-first lady.

The account had a balance of $5.9 million dollars at the period.

Justice Mojisola Olatoregun, set aside the ‘No-Debit Order’ which the Economic and Financial Crimes Commission earlier placed on the account on allegations that the money found in it was a proceed of crime.

Patience Jonathan’s lawyer, Mr Ifedayo Adedipe (SAN), had urged the court to unfreeze Jonathan’s account on the grounds that she was not a party in the suit leading to the freezing order.

Citing judicial authorities, Adedipe contended that the suit was an abuse of court process as the court had no Jurisdiction to make an order against one who is not a party in a suit filed before the court.

The EFCC did not file a response against Adedipe’s suit.