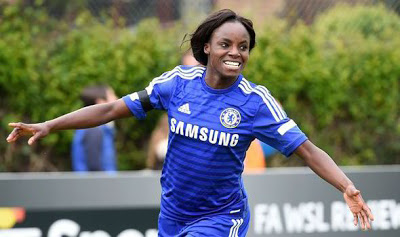 Nigerian-born England international Eniola Aluko has been recognized for her outstanding performances for Chelsea, with the PFA naming her to the WSL Team of the Year.

The Blues striker and teammate Karen Carney were included in the Team of the Year ahead of the PFA Awards to be held in the Grosvenor House in London on Sunday April 23 2017.

Eniola Aluko won the Golden Boot for the FAWSL courtesy of her 9 goals from 16 games over the course of the 2016 season.

In a 4-4-2 formation, Aluko occupied one of the attacking positions, with Manchester City’s Jane Ross offering support.

PFA members from 100 clubs (from the Premier League, Football League and WSL) cast their votes to decide the teams.