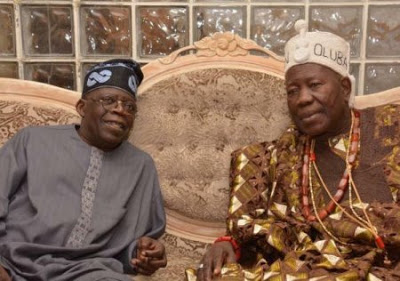 Former Governor of Lagos State and National Leader of the All Progressives Congress (APC), Asiwaju Bola Tinubu, has denied speculations in some quarters that he rejected a chieftaincy title from the Olubadan of Ibadan, Oba Saliu Adetunji, Aje Ogungunniso I.

The gossip column of a national newspaper (not The Guardian) had reported that Tinubu turned down the offer of a chieftaincy title of Balogun on him by Oba Adetunji.

In a statement released yesterday by his Media Office, Tinubu said he held the Olubadan of Ibadan in high esteem and could not have rejected a chieftaincy offer from him.

“The Olubadan of Ibadan, Oba Saliu Adetunji, is one traditional ruler I have tremendous respect for. I was in Ibadan last year for his installation.

“I hold him in high esteem. Governor Abiola Ajimobi also has respect for him. Why would I reject the offer of a chieftaincy title from him?” he queried.