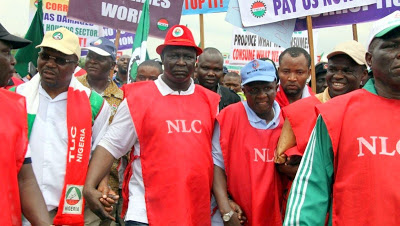 The group had claimed that an Amnesty report that accused the Nigerian Army of extra-judicial killings was false.

On Monday, the NLC said it will collaborate with AI to promote the rights of vulnerable groups across the country.

The President of NLC, Ayuba Wabba, stated this during a solidarity visit to the Amnesty International in Abuja on Monday.

Mr. Wabba said this had become imperative as rights of Nigerians, especially vulnerable groups such as women, children and the less privileged, were being trampled upon.

“I want to assure you of the support of NLC and the working class because as workers, our rights have been trampled upon several times.

“You are aware of the fact that across the states, salaries, pension and gratuity are not being paid as at when due. This is a violation of the rights of workers.

“Therefore, we need to stand side by side with organisations like Amnesty International to continue to protect the most vulnerable groups against the powerful and the rich in the society.

“We have documented some of these challenges that our people have gone through,” Mr. Wabba said.

He added that NLC would continue to partner with them in the fight for social justice, anti-corruption, good governance, accountability and in the dignity of the human being.

Mr. Wabba condemned the protest by the Global Peace and Rescue Initiative, GOPRI, at the office of the Amnesty International in Abuja on March 21.

He said Amnesty International was an organisation known globally and had worked extensively on human rights in many countries.

“For such issues to arise, especially the hiring of people to come and protest in this office is something that we condemn as organised labour.

“I really sympathise with you on what has happened, certainly Nigerians are already aware that this was a sponsored protest.

“It is something that is condemnable, we should not allow those business persons that have actually privatised protest as a means of getting money to continue in the business’’, he added.

Mr. Wabba urged them not to relent in ensuring that human rights, social justice for the less privileged, among others, were continually promoted.

He said there was need for the organised labour and its civil society allies to continue to build a strong network with the Amnesty International.

“It is very clear that the people who came were on a very destructive mission. They want to destroy the image and the credibility of civil society organisations, but I am happy none of them was associated with that scam.

“It is actually a scam, a rented group; that is why they ended up fighting themselves over the small amount of money promised by their sponsors.

“They want to institutionalise the culture of impunity and they are getting worried that the era of impunity is over, they will account for their actions,” Mr. Wabba said.

He assured that the NLC would not stop the struggle to ensure better living for the workforce adding that it would continue to collaborate with the organised labour to carry out humanitarian services.

Mr. Rafasanjani said Amnesty International was a reputable organisation that worked on accountability.