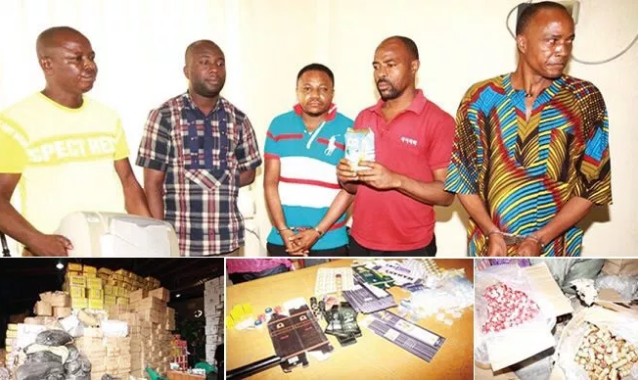 NAFDAC, yesterday blew the lid off activities of unscrupulous individuals engaged in the forgery of the Agency’s documents, production of counterfeit alcoholic beverages, water for injection and sales of suspected counterfeit Peak Milk.

Speaking in Lagos, NAFDAC’s Acting Director General, Mrs Yetunde Oni, noted that the Agency received complaints from three countries about alleged impersonation and scams by some Nigerians who pose as staff of the Agency to process registration documents for intending importers of regulated products.

Oni explained that it was discovered that the three cases were hatched and executed by a group of an international gang of criminal headed by one Mr. Eze Okoronkwo, a resident of Aba, Abia state. .

Her words: “The syndicate had collected the sum of $13,640, while there were plans to collect further $57,720. We believe this is a tip of the iceberg.” She hinted that they have also successfully arrested 4 Nigerians who engaged in production and sales of counterfeit products. .

Oni disclosed that the agency raided the premises of one Mrs. Nkiru Okoro of Ezedams Nigeria Limited located along Kilometre 16, Badagry Expressway, Ojo, Lagos, allegedly being used as a base for the production, distribution and sales of suspected counterfeit alcoholic beverages.

Items recovered include plastic containers, gas cylinders and packs of the fake water for injection packed as 100 to 10m vials and labelled ‘sterilised water for injection BP’, with manufacturing date of 2015 and expiry date put at 2020, and said to be produced by Hossanna Laboratories Limited, Surrey.”

A transport vehicle containing several cartons of suspected counterfeit Peak Milk from the East was intercepted by the agency as it arrived Lagos by 4am on February 17, the alleged owner, Onyekachi Ikegwonu, has been arrested.