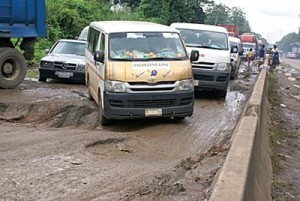 The federal executive council (FEC) has approved the construction of roads in 12 states at the cost of N82.5bn.

Babatunde Fashola, minister of power, works and housing, disclosed this to state house correspondents at the end of the council’s meeting on Wednesday.

According to him, the roads will cut across Adamawa, Taraba, Sokoto, Zamfara, Bauchi, Plateau, Osun, Kwara, Kano, Oyo, Kaduna and Kano.

He said the council also approved the engineering and consultancy design for access road one and two to link Asaba in Delta state and Onitsha in Anambra state with the second Niger bridge.

“Subsequent to the award of further works on the second Niger bridge we have started work now by this approval on the design of the link road that will connect the two states to the bridge. The design is expected to be completed in six months, and we will start procurement and as the bridge advances, we can then connect the two states. The contract sum is N150, 840 million” he said.

The project was launched by former President Goodluck Jonathan in 2014 at the sum of N117 billion.

It was awarded to Julius Berger, in a public-private partnership (PPP) arrangement, and when completed it would link the south-east with the rest of the south.

“The programme comprises of many pet policy actions, operational and financial interventions that need to be carried out by government to ?improve transparency service delivery, performance of DisCOS, ?transmission companies and the entire value chain in order to create a ?more viable power sector that is private sector run,” he said.?

He gave the highlights of the programme as “how to make the DisCOS viable, accountable and responsive to customers, ensure stability of the grid and expansion of the grid, transparency and communication within the sector and also processes for ministries, departments and agencies (MDAs) debts? and how to improve sector governance”.

“?It addresses access to renewable energy especially in rural areas using mini-grids and stand alone solutions and how we are going to carry out the solutions that have been developed for 37 federal universities and seven tertiary hospitals,” he said.

“It also addresses how to solve the Niger Delta problem and also how to ensure there is a stable and predictable foreign exchange policy for the sector so that it is somewhat protected from sudden head winds of the volatility of the foreign exchange market so that they can plan and deliver. It also highlights how to address the issue of vandalisation at consumer and production levels of pipelines and so on. This will help bring confidence to the market and stimulate the appetite that currently exists globally for Nigeria’s power sector.”