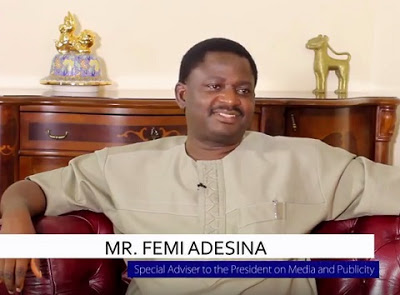 The Economic and Financial Crimes Commission on Thursday arraigned Christian Oyovweyho, alias Femi Adesina, before Justice Z. B. Abubakar of the Federal High Court Kano on a two-count charge of obtaining by false pretence.

The defendant allegedly impersonated the Special Adviser on Media and Publicity to President Muhammad Buhari, Femi Adesina, and attempted to obtain N300,000 from a professor of Economics at Bayero University Kano, Dalhatu Galadanci.

Subsequently, the defendant asked the professor to make payment of N300,000 to facilitate his appointment to Nigeria Port Authority or Nigerian Railway Cooperation and Rural Electrification. At that point, the professor got suspicious and reported the matter to the commission.

After listening to the charge, the defendant pleaded not guilty.

Prosecution counsel Musa Isah requested a date for trial in view of the plea of defendant.

The counsel representing the defendant, T.M. Oyedema however brought a motion for bail, praying the court to admit his client to bail pending the hearing and determination of the case.

Justice Zainab granted the defendant bail in the sum of N500,000 and two sureties in like sum. One of the sureties must be a state or federal government official not below grade level 8.

The other surety must be a respected member of the society with a landed property within the jurisdiction. Also certificate of Occupancy in respect of the landed property shall be deposited with the Deputy Chief Registrar of the court.

The case has been adjourned to April 11, 2017 for commencement of trial while the defendant remains in prison pending the perfection of his bail terms.

Chinese Woman Dating: Tricks And Tips to achieve your goals

Where You Should Purchase CBD Oil In Cedar Rapids, Iowa?