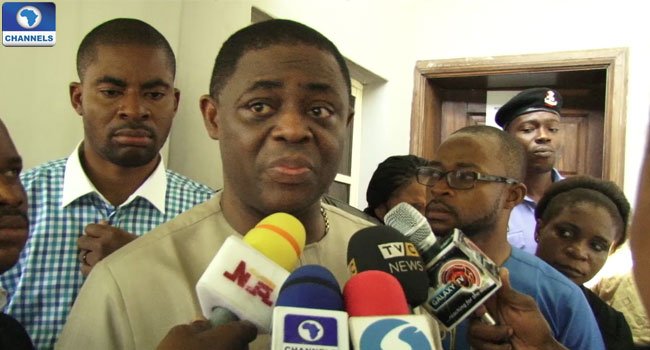 Former Aviation Minister Femi Fani-Kayode, has denied media reports that he was seeking an out of court settlement in his N26 million money laundering trial before Justice John Tsoho of the Abuja Division of the Federal High Court.

In a statement on Monday, Fani-Kayode described the reports as “false, embarrassing, and mischievous.”

The Economic and Financial Crimes Commission (EFCC) is prosecuting the ex-minister for collecting N26 million from the office of the former National Security Adviser, Sambo Dasuki.

Ahmed Raji, Fani-Kayode’s counsel, had asked on Monday for the trial  judge to adjourn the proceedings to allow him explore other options of settlement aside from going to trial.

“My Lord, I am just coming into the case and so I crave your indulgence to enable me familiarise myself with the case,” Raji said.

“Secondly, looking at the facts of the case and money involved, I believe that there are other options we can explore.

“The case involves the sum of N26 million and the law allows you to explore the option of plea bargain and so many other options rather than go through trial.”

However, reacting to media reports,  Fani-Kayode, through his spokesperson, Jude Ndukwe, said the plea bargain option was out of the question.

“Reports that are coming that Chief Femi Fani-Kayode has agreed to return 26 million naira to the EFCC in an attempt to settle his case at the Abuja Federal High Court out of court with them are false,” the statement read.

“The matter was adjourned in the Abuja Federal High Court today primarily because a new lawyer in the person of Mr. Ahmed Raji SAN was now handling the case and he needed time to be properly briefed on the matter and to go through the file.

“The reports are false, embarrasing and mischevous.