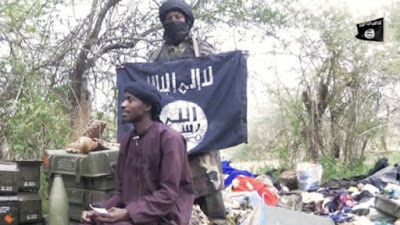 A 31-year-old repentant Boko Haram fighter claims he was amputated by his colleagues to whom he revealed his intention to surrender to federal troops.

The man who simply identified himself as Mohammed Abubakar told journalists in Maiduguri that he joined the militant group late 2014.

The man also claimed that he was a member of the ISIS recognised Mamman Nur faction of the Boko Haram until his surrender.

He was brought before journalists for questioning during a live press conference convened by the Theatre Commander of the Operation Lafiya Dole, Major General Lucky Irabor.

Abubakar claimed that he was forcefully recruited alongside his childhood friend at the Gamboru Ngala axis of Borno state in the wake of insurgency operations in that area.

After realising the futility of the militancy, Abubakar claimed he confided in his childhood friend and persuaded him to join him in planning an escape to surrender.

According to him, “I was betrayed by my supposed friend who leaked my plans to other fighters and on the day we planned to take off together, they found us and amputated my right hand and left leg as punishment, and left me to die.”

He survived the brutality and continued with his mission until soldiers found him and turned him over to the “Safe Corridor” officials.

While advising others to take advantage of the initiative and surrender, he confessed that many of the fighters were misled into becoming militants and also described the hardship they were going through in the trenches.

During the conference, General Irabor also revealed that a total of 3,332 civilians were arrested as BHT suspects while five BHT members surrendered to troops during operations conducted between January 11 and February 1, 2017.

Also, a total of 26 foreigners were arrested comprising 17 Chadians and nine Nigeriens.