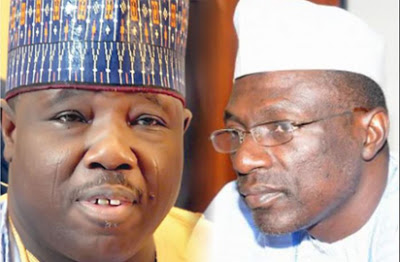 But that seemed to have escalated the main opposition party’s leadership crisis. The Ahmed Makarfi faction called on the police to flush out Sheriff. He should wait for the legal battle for the party’s control to end, the faction said.

Sheriff, accompanied by some members of his National Working Committee (NWC) and a retinue of aides and supporters, arrived at the secretariat at 6pm.

Sheriff went straight to his office where  he spent about 15 minutes. It was dusty.

He said he only came to access the situation. He plans to resume work on Tuesday.

”We came to see what renovation and cleaning to be done. While that is going on, we will continue with our consultation. We will do everything humanly possible to ensure that nobody is victimised for holding different opinions,” Sheriff said.

He reiterated his resolve to take the party back to the people at the grassroots, adding that “it is not enough for some people to sit in Abuja here and say they want to choose party leaders for the people in the village”.

The secretariat was sealed off in June 2015, at the peak of a fierce leadership tussle between Sheriff and the Ahmed Makarfi-led National Caretaker Committee.

All the critical organs of the party had taken sides with the Makarfi committee and the combatants fought from one court to the other for the control of the party.

However, the Port Harcourt Division of the Court of Appeal last Friday, pronounced Sheriff the authentic chairman of the party.

The Makarfi camp has approached the Supreme Court to challenge the ruling of the appellate court.

It yesterday accused Sheriff of entering the secretariat “illegally”.

A statement by the spokesman of the Makarfi faction, Prince Dayo Adeyeye, said:

“As far as we are concerned, the forcible entry of Ali Modu-Sheriff and his team into the party secretariat is illegal and most unwelcomed.

“We say this because the keys to the secretariat are with the Board of Trustees (BoT) and we have checked with them, and can confirm that the keys were not handed over to Sheriff or any of his followers.

“The implication of this was that he broke into the secretariat which is a criminal offence.

“We also expected that Modu-Sheriff should have waited for the conclusion of the appeal we filed at the Supreme Court before he forced himself in just like we held on when we got court judgement favouring us last year.

“We are condemning his action in totality and we view it as an affront on the rule of law.

“Given his act of illegality, we stated clearly that he should be held responsible for any loss of documents or damage to the property within the party secretariat.

“The administrative staff as accounting officers, were not around to see the event happen, and as the custodians of the property of the party, they refused to participate in the illegal entry made by Ali Modu-Sheriff.

“His action is provocative and is capable of causing another round of crisis in the party.

“We advise him in his own interest, to vacate the secretariat immediately.

“We also call on authorities of the Nigerian Police to prevent chaos by flushing Ali Modu-Sheriff and his team out of the PDP secretariat and let all parties wait for the judgement of the Supreme Court, which is the highest court in the land.”