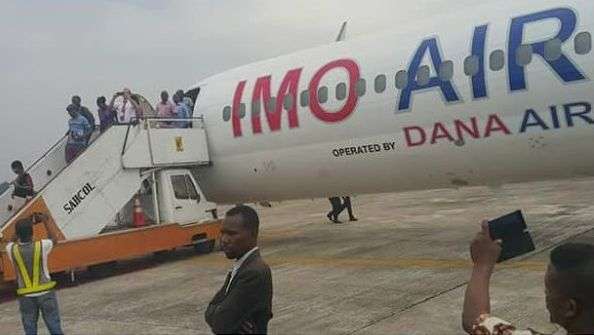 In July 2005, the maiden flight of Virgin Nigeria was launched with fanfare. Virgin Nigeria was the brainchild of a partnership between the Obasanjo administration and the Virgin Group which owned and operated Virgin Atlantic airline.

The government shunned all protests against the deal which was clearly against the interest of Nigeria. An aviation activist Capt. Jerry Agbeyegbe had gone to court to stop the deal but was assassinated before the case was heard. The case was swept under the carpet as one of the unresolved assassinations under the Obasanjo administration.

By July 2009, the party had crashed, as the Virgin Group pulled out of the deal and of course left with an estimated US$35m to cover for its equity contribution and brand royalty fee for Virgin Nigeria’s use of its brand. This was coming barely one year after the CEO of Virgin Nigeria, Conrad Clifford, had told the national assembly that the airline would acquire 40 aircraft and employ over 6,000 Nigerians by 2010 (wishful thinking).

Virgin Nigeria left a legacy of an operational debt estimated at about N35.5bn in just three years of operation which surprisingly was in excess of the estimated operational debt profile of Nigeria Airways in the 10 years leading to its liquidation. Worse still, Virgin Nigeria added no value to the aviation industry in the form of training or assets of any kind.

The Virgin Group recovered more than its investment but left a huge unsecured debt burden for the airline’s bankers, the United Bank of Africa (UBA).

An aviation consultant, Chris Azu Aligbe, described the lesson learnt as follows: “In all, it is a classic lesson of how not to hand over our patrimony, without a national oversight, to a foreign investor whose ulterior interest is not known.”

On January 24, 2017, the Nigerian media space was agog with the news of the launch of Imo Air by the Okorocha administration and photographs of a plane branded Imo Air and Dana Air which Okorocha claimed was one out of five acquired by the state government to provide airline services to indigenes of the state.

Okorocha admitted that the Imo Air was yet to get an operational licence hence the partnership with Dana Air which would last for 10 years for the management of the airline and boasted that Imo Air would become a full blown airline by 2018.

The launch of Imo Air has been dismissed by many as a publicity stunt and the Okorocha administration has not made available any other information beyond the governor’s speech at the launch.

Imo state like other states has been severely hit by the recession despite denials by Okorocha to the contrary and therefore all avenues to raise revenue is being explored, but like they say in Nigerian parlance, setting up and running an airline business is no beans.

What is the state’s equity contribution in the deal and can the Imo public be availed a copy of the agreements signed with Dana Air? Dana Air operates an airline which will fly the same route as Imo Air, so what then is the role of Dana Air in the whole arrangement? Are they just technical partners or managers of an airline which would be in competition with them?

The Virgin group, while operating Virgin Nigeria dominated the local and West African routes, but was reluctant to fly international routes as demanded by the government. The reason was clear, Virgin Atlantic, its parent airline dominated those routes and even when they bowed to government pressure, Virgin Nigeria’s international flight was deliberately poorly operated.

Why even the choice of Dana Air? Nigeria has made 10 attempts to float its national carrier without success due to low capitalisation and lack of required expertise for an airline launch. The airports are littered with relics of dead airlines so what is Dana Air’s operational profile in the industry to be trusted with such a huge financial venture?

Who are the members of the board of Imo Air and how much control does the state exercise over the board?

The Imo state government should come clean on these questions as Imo people deserve to know how their collective patrimony is being utilized as they will bear the consequence of a bad investment.

Except the launch of Imo Air is the mere wishful thinking and publicity stunt of the Okorocha’s regime, the Imo public deserves to know.

The author is grateful to Chris Azu Aligbe, whose writings on the Aviation Industry were relied upon in writing this article.