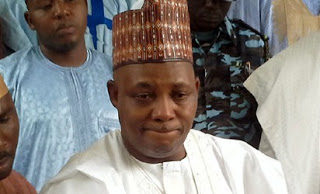 The Borno State Governor, Kashim Shettima, said on Monday that at least 54,000 women had become widows due to the activities of the Boko Haram sect between 2011 and February 2017.

He added that the terrorists destroyed 5,335 classrooms in 541 schools.

Shettima said this while delivering a speech at the 2017 Murtala Muhammed Memorial Lecture, an annual event held in commemoration of the third Nigerian head of state who was assassinated on February 13, 1976.

While delivering the keynote address titled, ‘Managing the Boko Haram Crisis in Borno State: Experiences and Lessons for a Multi-party, Multi-ethnic and Multi-religious Nigeria,’ the governor opined that the cure for religious extremism remains quality education.

He said, “In Borno, there are currently 54,000 widows,” adding that the political class needs to step up its humanitarian efforts.

The governor added, “Virtually all our schools are being rebuilt in Borno. As I said earlier, a total number of 5,335 classrooms in 503 primary schools and 38 high schools and two tertiary institutions were destroyed in the state.”

Shettima urged the western world to assist Nigeria in the fight against terrorism and the rehabilitation of victims, adding that the Syrian refugee crisis will be nothing compared to Nigeria’s if the nation’s crisis is not well handled.

He added, “Believe me, unless we wear our thinking caps as leaders, the future is very bleak. We either take advantage of the demography and its dividends or reap demographic disaster. As I said in Washington, Syria has a population of less than 30 million people. I think it is in the interest of the Western world to see that Nigeria works. Just two million Syrians knocking on the door of Europe and the Europeans have become agitated. What do you say of about 30 million English-speaking Africans knocking on the door of Europe?

“And in Nigeria, South is the Atlantic Ocean; up North is the Sahara desert. We can eat up the food reserves in Niger, Mauritania and all the countries in the Sahel within a week. The other side is Togo which is not bigger than Ogun State.”

Osinbajo noted that great leaders like the late Nelson Mandela of South Africa; Martin Luther King junior in the United States are remembered for promoting peace even in the face of persecution.

Acknowledging the guests for their solidarity to one of Nigeria’s heroes past, the Chief Executive Officer of the Murtala Muhammed Foundation and daughter of the late head of state, Aisha Oyebode, praised the President Muhammadu Buhari administration for its achievements in the fight against terrorism.

She added, “For those that knew my father intimately while he was alive, you would agree that beyond the mien of the no-nonsense general, he was generous and kind-hearted. He was more at home in the company of the masses, and understood the pains and suffering of the downtrodden, and used all the power and resources he had to fight for the weak and the oppressed within and outside Nigeria. General Murtala Muhammed truly had empathy, which is why 41 years on, his sacrifice and legacy as a man of the people, is still very worthy of commemoration.”

“We, at the MMF, believe that our theme for this year – Humanitarian Crisis and Response in a Plural State: What Role for Leadership? – is a fitting tribute to General Muhammed’s legacy.”