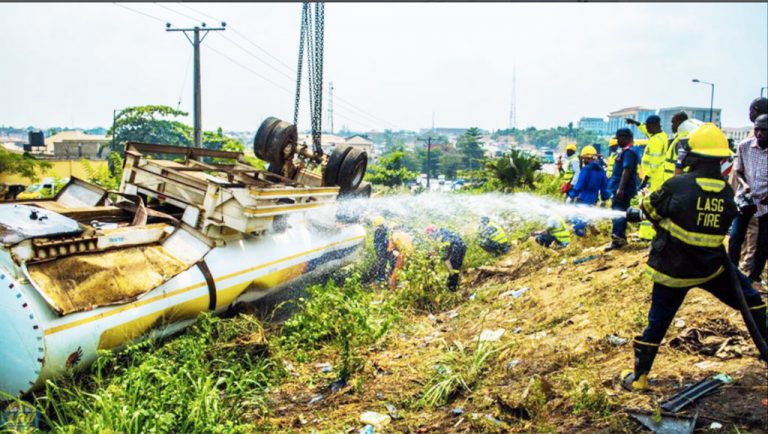 Mr. George made the disclosure on Tuesday in Lagos at the ongoing national training for tanker drivers organised by Petroleum Tanker Drivers, PTD, branch of NUPENG.

Mr. George, who is currently the Personal Assistant to the Director, Lagos State Fire Service on Training Matters, said the service has already recorded six tanker in January 2017.

He urged tanker drivers to be careful on the highway, stressing that carelessness on the part of tanker drivers was the main cause of most of the accidents.

He also urged tanker drivers to always carry their 2x9k Dry Chemical Powder (DCP) fire extinguisher and ensure it is serviced and accessible in emergencies.

“This morning alone, we have recorded two tanker accidents; one in Magodo and another one in Gbagada which makes it six of such accidents this month alone.

“We are using this forum to advise our drivers to be careful on the road and to always make use of their fire extinguisher anytime there is fire,” he said.

According to Mr. Adekanmbi, medical check-up will enable the drivers know their health status before embarking on any journey.

He said that some of the accidents occurred due to poor vision and fatigue.

He also stressed the need for them to care for their life, as life had no duplicate.

In his remarks, Salimon Oladiti, National Chairman of PTD, described the training of its members as “critical aspect” of the union’s goals.

NAN recalls that in its efforts to reduce the rate of accidents on the highways, PTD branch of NUPENG commenced training for no fewer than 4,500 members of the union on January17.