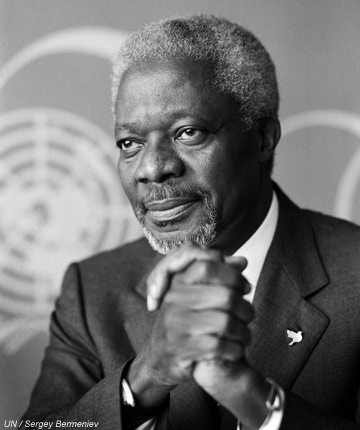 A former Secretary-General of the United Nations, Mr. Kofi Annan, has expressed reservations about the candidature of the Republican Party in the upcoming US election, Donald Trump.

At a conference held in Salzburg, Austria,  as part of the Nestle Salzburg Festival on Saturday, Annan expressed worry over Trump’s adventures and noted that he was sorry for the US.

He said, “I feel like, ‘Let’s cry for America.’ How can a country with so many talents end up with someone like him as a candidate?”

Also part of the discussion moderated by the Chairman of the Board of Directors, Nestle S. A., Peter Brabeck-Letmathe, were a former Mexican President, Ernesto Zedillo; Professor of Economic Policy, University of Mainz and Insead Singapore, Beatrice di Mauro; and another international scholar, Patrick Aebischer.

While all the speakers noted that the US had made progress in terms of economy, they lamented the political uncertainties that pervaded some countries that included Turkey.