Annemiek van Vleuten, a female Dutch Cyclist at the Rio Olympics is in intensive care after she lost control ten kilometres from the finish line in a race that she was leading and flew head over heels, smacking her head into the concrete gutter by the side of the road. A freak accident that has left her with three cracks on her spinal cord and severely concussed.

The Dutch Cycling Federation tweeted after countrywoman Anna van der Breggen – who said she thought Van Vleuten “was dead” – claimed gold that the crash cyclist was “conscious and OK”. 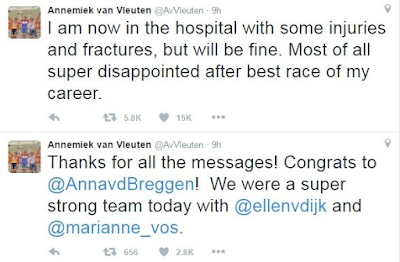