A Chinese diver missed out on Olympic gold but bagged a diamond ring after her teammate boyfriend surprised her by popping the question .

He Zi got the shock of her life when partner Qin Kai interrupted the medal ceremony of the women’s 3 metre springboard event to get down on one knee.

Qin, who won a bronze medal in his own synchronized diving event last week, took to the stage in front of a crowd of thousands after He received her silver medal.

She later said: “I didn’t know he would propose today and I didn’t expect myself to marry myself out
so early.

“I saw him during the afternoon and he seemed to be memorising something, so I asked him ‘what are you doing?’ and he said he was singing.

“I’ve forgotten most of what he’s said (during the proposal), but it’s largely what you can expect like promises, but what touched me the most is that he said he was willing to be bullied by me for life.” 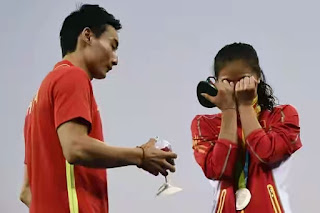