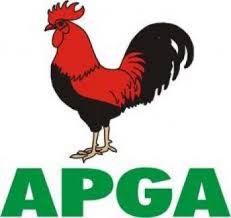 The All Progressives Grand Alliance (APGA) has described as laughable, a claim by the All Progressives Congress (APC) that it would take over  Anambra State by 2017.
It also raised the alarm over alleged threat by APC to use its federal might to cause a revolution that would put other political parties on the run during the 2017 gubernatorial election in the state.
Describing the alleged threat as “treasonable felony,” the Anambra State Secretary of APGA, Sir Tony Ifeanya called on security agencies to note the statement by the APC state secretary and hold him responsible in the event of any such incident in the state.
“We want to draw the attention of the Federal Government in whose name, the APC Anambra State is threatening to cause a revolution in Anambra, boasting that when the time comes we shall all leave Anambra. This is treasonable felony.
“The APC scribe has told everybody ahead of time that they intend to cause havoc in the state in 2017 gubernatorial election and should be held responsible by law enforcement agencies when such happens.”
Ifeanya said APGA has a firm grip of the state having produced successive governments that have been doing well and cannot be wished away by the APC in the state.
“The APC and its scribe instead of hiding their face in shame for deceiving Nigerians of a purported change agenda that never was, and for bringing untold hardship to Nigerians because of their lack of vision and mission, are dreaming of taking over Anambra in 2017.”
When for over a year now, they have not been able to give Nigerians a clear road map of where we are going or do they think that Anambrarians could be fooled as they fooled Nigerians. Anambra people are wise and cannot fall to their empty boasts.
“We do not want any negative change in Anambra State. Obiano is a man with clear vision of what he came to do in Anambra State and is doing it not like APC who has no agenda for Nigeria.”
Describing as pure blackmail and a calculated attempt to pool wool over the eyes of the less informed APC’s claim that Obiano was delving into loans to retain power in 2017, the APGA scribe said, “The total amount of money sought to be borrowed so far by the Obiano administration is far less than the amount the federal government of APC is owing the state.
“As I speak, the Federal Government owes Anambra state over N43 billion on federal projects executed by the governor just to ensure that Anambra people are still making ends meet. If the Federal Government of APC has paid the state government the N43 billion it owes the state, our governor will not be talking of borrowing from anywhere after all when all other states were going for bailout our dynamic governor rejected it. Or what do you want him to do when your party at the centre refuse(s) to or are reluctant to pay the debt. You want him to fold his hands and start complaining like most of your APC governors. And because he is not doing so, you are now threatening to take over Anambra by force in 2017.”