The word ‘negro’ had to be removed from a painting inside Kensington Palace at the last minute before the Obamas arrived for their informal dinner with the royals.

The U.S. President and First Lady were just moments away from being entertained by Prince William, Duchess Kate and Prince Harry on Friday night, when an eagle-eyed assistant spotted a plaque, which named the piece of art ‘The Negro Page’.

A frantic removal reportedly took place inside the drawing room to avoid causing offence to the American couple.  A pot plant was also put in place to cover where the plaque would have been.

A source told The Sun: ‘Imagine the horror when someone spotted the N-word.’

The dramatic painting on one of the walls – A page With Two Horses, by Albert Cuyp, from The Royal Collection – features a black servant boy in a landscape from 1660. It is also known as The Negro Page. 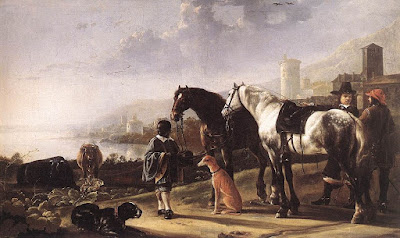 Mail on Sunday art critic Philip Hensher says the work, from the Golden Age of Dutch painting, would particularly appeal to a History of Art graduate, such as Kate. 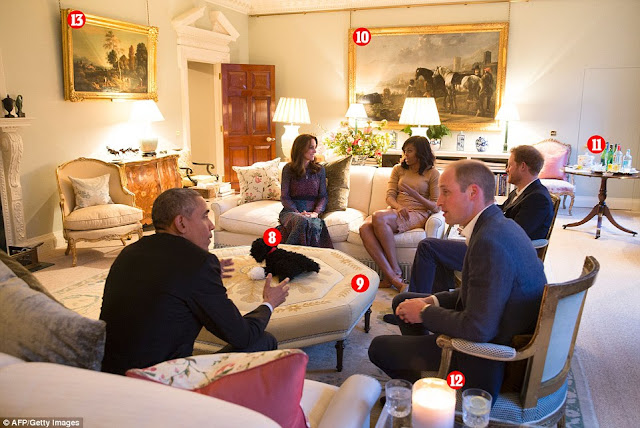 On Friday, the world was given an unprecedented insight into the world of the royals as the drawing room was seen for the first time since being refurbished.
The lavish room was recently redecorated for the couple using £4.5million worth of taxpayers’ money although the couple footed the bill for fixtures and furnishing themselves.

Its design was more reminiscent of a comfortable country home than a grand, palatial lounge – with floral cushions adorning comfortable looking cream sofas.

On the grand black piano sitting behind William and Mr Obama, who looked at ease in each other’s company, were intimate family photos and an elaborate bouquet.