Keenyatta Robinson refuses to give her dough to Domino’s Pizza after discovering a vulgar note on two receipts. Robinson’s daughter recently ordered a pizza from a Domino’s in West Bloomfield, Michigan. When she saw the receipt, something bothered her (and it wasn’t the price of the pie).

“I don’t understand why they would treat me this way,” Robinson said.

Robinson decided to see if it was an accident, so she placed another order.

“When I came to pick it up that receipt had the same vulgar language,” she said.

Robinson believes the receipts are in retaliation for the time in 2014 when she complained about not getting the sausage pizza she ordered.

The manager told her she would no longer be served, and she complained to his superiors. Ronnie Asmar, Director of Operations at Domino’s, said that manager was later terminated, in part, for being rude to customers.

“His parting gift to us was putting that vulgar comment in her phone number’s notes,” Asmar said.

Apparently, no one noticed the comment until Robinson pointed it out.

Asmar has tried to apologize to her and offered a gift certificate to make it up to her, but Robinson refuses to accept it — ever. “I will never eat here again,” Robinson said. “Ever in my lifetime,” as she walked away. Surprised she is not suing. E no dey tey them. 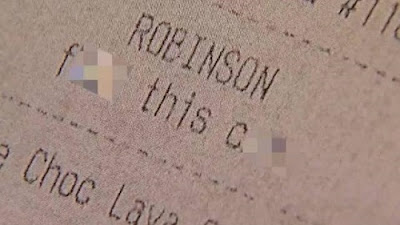 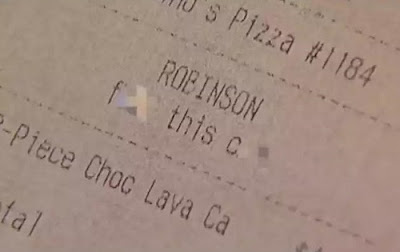