Police say nine-year-old girl was visiting a home on Holland Avenue in Elmont around 10.30am Sunday for a playdate with two girls when she was attacked by a pit bull. Witnesses say the dog latched onto her neck, and head, and shook her like a rag doll.

“An Angel on Earth” – that is how family and friends will remember the 9-year-old girl who was mauled to death by a pit bull in the backyard of a home in Elmont on Sunday. “I wish I could turn back time – too sweet to go,” says family friend Stacie Case.

“A woman in the house attempted to pull the pit bull off of her. She could not, and called 911,” said Detective Michael Bitsko of the Nassau County Police Department.

“She tried with a broom – too weak, too scared,” said neighbor Novelette Wilson. 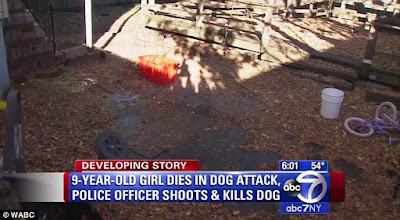 By the time police arrived, Eyewitness News is told that two officers ran to the back, while one went through the house to the rear door.

“The pit bull got distracted and charge at the officer,” adds Detective Bisko.

The officer fired, killing the dog, giving the other officers time to get to the girl.
The victim was rushed to Franklin Hospital/LIJ, but surgeons could not mend what the dog had done. She was pronounced dead a few hours later.
“It’s so hard, I’m taking it so hard,” says Case.
Meanwhile, the dog’s owner, 29-year-old Carlyle Arnold was arrested at the scene, on a separate charge of violating an order of protection. 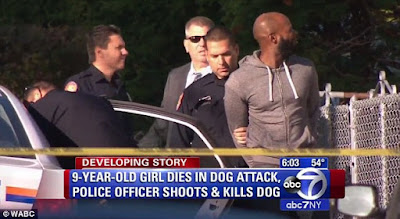 Officials do not believe he was home at the time of the attack. It’s not clear if he could have pulled the dog off in time.

Authorities have not yet released the name of the child, or released an explanation as to why the dog turned so violent.