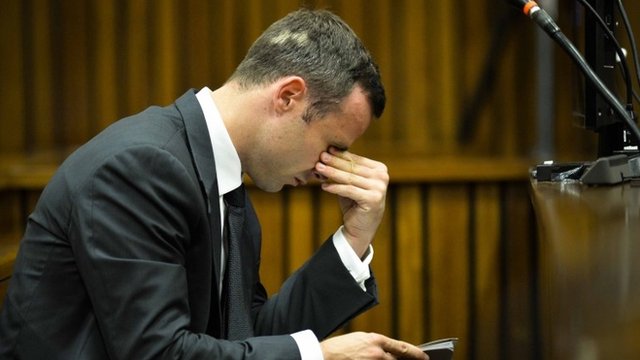 South African paralympian Oscar Pistorius, freed on parole last month after serving a fifth of his prison term for killing his girlfriend, faces years more in jail if state lawyers can get his conviction scaled up to murder from culpable homicide.
Prosecutors will argue before the Supreme Court that a high court judge was wrong to let Pistorius off the more serious charge after he fired four shots through a door on Valentine’s Day 2013, killing Reeva Steenkamp.
The 28-year-old track star will not be present at the one-day hearing in Bloemfontein, 400 km (250 miles) southwest of Johannesburg, his lawyer Barry Roux told Reuters.
A panel of five judges will hear the appeal, and could either order a retrial, convict Pistorius of murder themselves or reject the prosecution’s appeal, legal experts have said.
“The (high) court not only approached the circumstantial evidence incorrectly, but also incorrectly excluded relevant evidence,” prosecutors said in documents filed at the court.

Pistorius, dubbed “Blade Runner” because of the carbon fibre prosthetic blades he uses to compete, denied deliberately killing his girlfriend during his six-month trial, saying he mistook her for an intruder at his home.

Prosecutors said Pistorius intended to kill Steenkamp, who they said fled to the toilet during a row.
But high court Judge Thokozile Masipa ruled last year that the state had failed to prove intent or “dolus eventualis”, a legal concept that centres on a person being held responsible for the foreseeable consequences of their actions.

The state insists Masipa misinterpreted some parts of the law and that Pistorius must have known that the person behind the door could be killed.
A murder conviction would result in a minimum sentence of 15 years in prison.
After the trial last September, Pistorius, a gun enthusiast, was also convicted of firing a pistol under the table of a Johannesburg restaurant but was let off on charges of illegal possession of ammunition and firing a gun out of a car sun-roof.

The athlete was freed two weeks ago in line with South African sentencing guidelines that say non-dangerous prisoners should spend only a sixth of a custodial sentence behind bars.
He has not been seen in public since then and is under house arrest that confines him to his uncle’s home in a wealthy Pretoria suburb for the duration of his sentence.