After the recent exposure of Justin Bieber’s eggplant to the entire world, Clone-A-Willy, a do-it-yourself dildo-maker, says it has offered him $1 million to advertise its vibrating replica-penis kit.
In a cheesily worded letter to Bieber’s listed commercial agent that was also sent to The Huffington Post, Clone-A-Willy wrote:

“Justin Bieber, he’s popular, talented and now as the entire world knows … quite well-endowed. You can only imagine … a huge billboard of Justin Bieber and “Clone-A-Willy” in West Hollywood. It would surely do wonders to help promote his new album and certainly wouldn’t hurt his “dating” life.

“We know that Justin is a big celebrity and our offer is commiserate with someone of his enormous stature,” the letter continues. “We are offering Mr. Bieber a million dollars to endorse ‘Clone-A-Willy.’ “

If there’s a buck to be made from the incident, Clone-A-Willy (its product shown below) is being upfront about it and wants to milk the exposure. 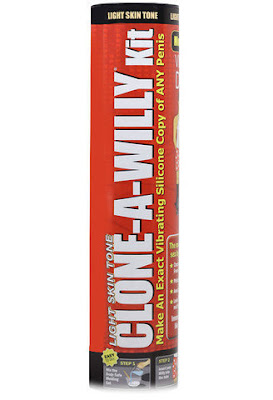 The brand says its kit produces “a vibrating silicone replica of any penis in the comfort of your own home.”