Lagos State governor, Akinwunmi Ambode, today handed over N50million cheques to the governors of Yobe, Adamawa and Borno state as part of the Lagos state government’s support towards the rebuilding of their states after the various Boko Haram attacks. Ambode made the donation at the Presidential Villa, Abuja, at a press conference he addressed in company of the Govs of Adamawa, Senator Bindo Jibrilla; Borno, Alhaji Kashim Shettima; and Yobe, Alhaji Ibrahim Geidam. 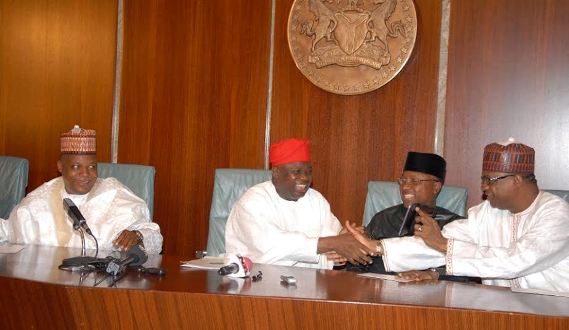 He commiserated with the state governments as well as the families of those who either lost their loved ones or have been displaced from their homes. Responding on behalf of the states, Governor of Borno State, Kashim Shettima thanked Ambode for the gesture and promised to channel the money to people of the state who are in dire need of it.