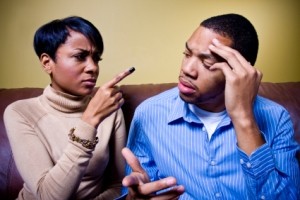 1. He doesn’t think you make enough time for him. There’s nothing wrong with wanting your space, or having a job that forces you to travel a lot. But if he wants to see you more and you’re not sure how much time you should be investing in a relationship, ask yourself this: “In the time I spend not seeing my boyfriend, could I hypothetically be spending time with a secret family that I have across the country?” If the answer is “yes,” then you can probably spare a few more hours a month.

2. He caught you talking to another guy and you acted really shady about it. There’s nothing wrong with having guy friends, or answering a coworkers text. There’s a lot wrong with freaking out, covering your phone, screaming, and then smashing it against the wall when your boyfriend peaks over your shoulder. That’s crazy suspect, and you wouldn’t do that unless you had something to hide (or your work deals with top secret information that he’s not allowed to know; also understandable). Be chill.

3. He’s never been to your apartment. Or met any of your friends. If your real life relationship parallels that of any movie character who “doesn’t want to get too close,” it can make a guy (or anyone) feel like you’re hiding something.

4. He thinks you treat him more like a friend than a lover. It’s not as if you need to constantly be engaging in PDA or holding hands while skipping down the street, but if you act like you can’t even bear to kiss or touch him, that can really screw with his self-esteem.

5. You’re way more successful than him. This is one he’s just going to have to get over, but everyone can feel pretty shitty when they’re the less successful one in the couple. Don’t hide your promotion from him, but just be a little sympathetic if it gives him a complex about his job.

6. You’re a really big deal on Instagram. Yeah, the odds of you leaving him for someone who comments “u r so hot bb” is pretty much zero, but insecurities don’t have to be rational.

7. He’s been cheated on before. He’s coming into this relationship assuming that at some point things will blow up in his face. Just be patient and show him he can trust you.