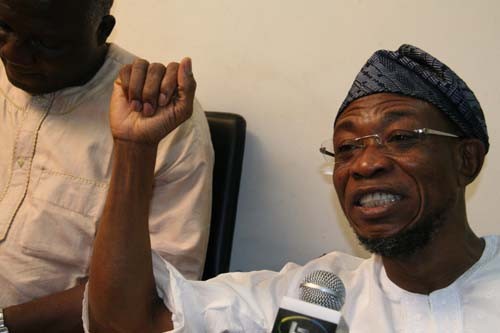 Primary school certificate not condition for payment of salaries, Osun Head of Service

…As Govt commences payment next week

The Government of Osun has said that Primary School Leaving certificate is not a condition for the payment of areas of salaries to Osun workers.

This disclosure was made on Wednesday by the Osun Head of Service, Mr. Sunday Owoeye in a programme monitored in Osogbo on the State television?, Osun State Broadcasting Corporation (OSBC).

He described as mischievous and incorrect the report in a media report that the state has asked all workers in the state to present their Primary School Certificate before the arrears of salaries due to workers are paid.

The Head of Service pointed out that the circular sent out by the government is not meant for the payment of salaries, but for the monitoring and control within the civil service. Owoeye held that the verification of workers under a normal civil service situation is an exercise that is supposed to be carried out yearly.

He added that streamlining the civil service must be an on-going process, saying that for an organisation, be it public or private to grow and remain healthy, such outfits need to examine and check itself regularly. The HOS emphasized that the circular and forms that were distributed to worker to fill were like a questionnaire that civil servants need to input information that are applicable to such category of workers.

According to him, “It needs to be stated clearly that in the scheme for public service workers, it is only those who are appointed as cleaners, messengers and ?guards that are expected to present their primary six certificates. Do you ask Doctors, Engineers, Pharmacists and other cadres in that category to come and present primary school certificate?”

“Form filling is very important and you can see that in why institutions place much emphasis on it. If you are filling a form, you are not compelled to fill everything. You will have provision for “Not Applicable”. If the question is not applicable to you, then you put it their. Primary six certificate is not a compulsory condition.”

“The impression these people are now giving is that the circular says that if you don’t present your Primary six certificate, you can’t receive your salary, that impression is mischievous. So, it is not correct that all workers are being asked to present such certificates before they are paid,” Owoeye emphasised.

He averred that the government is not unaware of the fact that some people have been paid to distort the truth, noting that they will want to justify the pay received by their paymasters by trying to set workers against government.

?Owoeye held that the much talked about bail out is not a charity from banks, noting that Osun is trying to be sure that the loan meant for the payment of backlogs gets to people that are supposed to get it.

He added that the screening and verification exercise is a scheme by government at ensuring that leakages are being blocked, “?nobody borrows to pay for fake or dubious service or products. As we speak the comprehensive screening of workers and pensioners of the state of Osun was completed only yesterday (Tuesday) whereupon a formal report is to be submitted on the outcome of that exercise this Friday. We are on it.”

Speaking on insinuations that the process is a delay tactics, he queried this saying workers and government had earlier decided that there should be an exercise to get the actual figure of the amount to be paid as salary.

“Government’s intention on this exercise is healthy and we are on course. The chairmen of the screening committees are to bring in their reports. We are looking at it and we’ve been discovering irregularities. I don’t have to hide that from you.