An Australian fashion designer has been arrested and charged with five counts of assault following allegations he groped, harassed and exploited young female models.

It was reported in June that dozens of aspiring models had rallied together to expose the degrading treatment they experienced at the hands of the 31-year-old club promoter and would-be fashion designer, Shardz Hourani.

See Photo of one of his numerous touching body below…
Photos of female models being man-handled by Hourani during a swimwear photo shoot were posted to the Facebook page with the advice to “Say NO to Maniac Fashion”,  The photographs allegedly show Hourani groping the models’ breasts, buttocks and thighs. 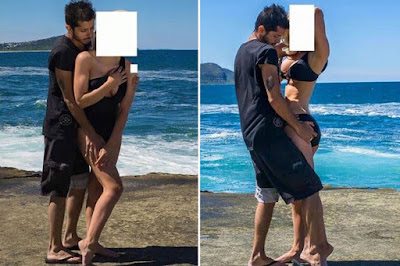 Hourani was arrested at a shopping centre in Sydney, where he worked by day as a salesman in a men’s fashion store.

He was taken to Bankstown Police Station and charged with five counts of assault with act of indecency.

Hourani was granted strict conditional bail and is due to appear at Waverley Local Court on 30 July 2015.

In June, Novelli and fellow model Tia Wright said they had experienced appalling and degrading treatment when they posed for Hourani’s swimwear photo shoots.