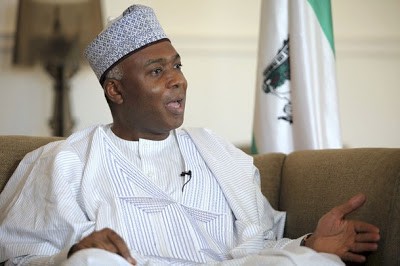 Former governor of Kwara State and senator representing Kwara Central, Bukola Saraki, has said that Nigeria was losing a total of $2 billion to fake fuel subsidy operators, insisting that the fuel subsidy management in the country was a very big platform for fraud.

Saraki, who regretted that the alleged fraud in the scheme was being allowed to fester by the Federal Government, urged the incoming administration of General Muhammadu Buhari to completely remove the fuel subsidy and restore normalcy to the petroleum sector.

Speaking to newsmen, yesterday, in Abuja, the senator accused the government of issuing import licenses to very bogus number of companies totaling 82 and being used by oil marketers and government officials to rip off the national treasury on yearly basis.

He argued that it would be better to remove the fuel subsidy and deliver the sector and the citizenry from the grip of racketeers in the industry, who would never allow things to work well because of their personal aggrandizement.

According to him, subsidy in itself was never a problem to the country but the bad management of the subsidy, which he said had been turned into a huge racket that created the lingering crisis in the oil sector.

He said: “No matter what is happening now, if you go back to look at it, the major issue that dwindled us was the subsidy management. We are talking of about minimum of over $32 billion wasted on it over the last five to six years.

“That is the difference between where we are now and that time. It has impacted on our exchange rate, it is going to impact on our infrastructure, there is no money for capital budget.

Speaking on his ambition of becoming the next Senate President, Saraki maintained that he had the capacity, competence and the will power to drive the 8th Senate to reposition the country towards rapid socio-economic development, advising the elected Senators of the All Progressives Congress, APC, to focus on competence, capacity and merit in their choice of the next President of the Senate and other principal officers rather than on sentiments.

He said he had observed with dismay that Nigerians were not receiving the needed services from their elected representatives in the last many years of democratic governance in the country because leaders usually emerged through ethnic, religious and sectional sentiments rather than on the basis of qualification and competence.