An investigation by Sahara Reporters has revealed that President Goodluck Jonathan and his associates are masterminding a spike in protests against Attahiru Jega, the chairman of INEC. Numerous sources within the President’s circle disclosed that Jonathan has accepted the advice of hawkish members of his kitchen group to ask Professor Jega to proceed on terminal leave next week.

In order to prepare Nigerians and the international community for the imminent sack of Jega, Jonathan was said to have approved the distribution of N200million in each zone of the federation to mobilize protests against the henchman of the electoral body.

“Mr. President and his close advisers feel that Professor Attahiru Jega is now too stubborn to eliminate the use of permanent voter cards and electronic readers for the 2015 elections,” one source said. 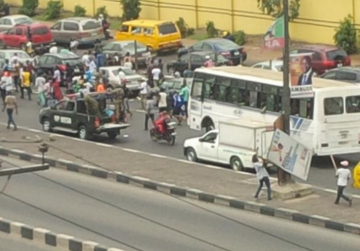 The spate of orchestrated protests started last week on a small scale in Nigeria’s capital of Abuja, then moved to the southeast where members of the Movement for the Actualization of the Sovereign State of Biafra (MASSOB), staged several large-scale protests demanding Mr. Jega’s removal.

One source at the Presidency told our correspondent that the Odua People’s Congress (OPC) staged a rally in collaboration with a pro-Jonathan group in Lagos today and a few more protests are planned for other southwest states at the urging of sponsors who are embedded in Aso Rock, Nigeria’s seat of power.

In addition, a group of ex-militants from the Niger Delta are expected to stage protests too against Jega.

Once the orchestrated demonstrations reach a crescendo with the ones in the Niger Delta, the Secretary to the Federal Government, Anyim Pius Anyim, is expected to write a letter to the INEC chairman ordering him to start his pre-retirement leave.

Our sources said the Jonathan administration has concluded that the removal of Mr. Jega from the electoral commission would present the only hope that the use of biometric voters card and electronic card readers would be abandoned.

Once Jega is sent on compulsory terminal leave, said our sources, Jonathan will replace him with one of the national commissioners who is open to the idea of doing away with electronic card readers.

Even though Jonathan has often listed the introduction of permanent voters cards (PVC) as part of his legacy, he and his closest associates have been pushing for weeks, covertly and overtly, to abandon the system. The president’s team has argued that too many voters were yet to collect their PVCs.

But INEC has countered that most of the PVCs have been picked up. In addition, Jega and members of civil society groups have defended the system, calling it a key to combating rigging and other malpractices that have plagued past elections in Nigeria.