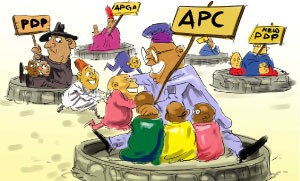 Worried over the  seeming growing acceptance of the APC and its candidates among Nigerians ahead of the forthcoming general elections, President Goodluck Jonathan and the leadership of the PDP have lately stepped up moves to reconcile with aggrieved PDP members, reports.

The party has lined up series of meetings with the parties candidates in the polls and aggrieved members with a view of turning the tide against the APC.

One of such meetings was held on Sunday when the President Jonathan and the party leadership met with the governorship candidates of the party in all the state where governorship election would be held.

President Jonathan is expected to hold a similar meeting with the party’s National Assembly candidates before the March 28 elections.

The President will also be meeting with states Houses of Assembly candidates before the April 11 elections.