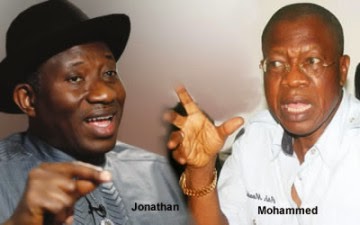 APC has accused the Nigerian government of planning to deposit a large sum of money into the bank account of the Chairman of the Independent National Electoral Commission, Attahiru Jega, in order to frame one of its leaders, Bola Tinubu.

The Spokesperson of the APC, Lai Mohammed, who addressed a press conference Wednesday in Lagos, made the claim.

APC said the goal of the plot was to use that as a reason to sack Mr. Jega so that he will not preside over the rescheduled elections slated for March 28 and April 11. “There is a plot to transfer a humongous amount of money into the bank account of the INEC Chairman, Prof. Attahiru Jega, and then claim that the money came from Asiwaju Bola Ahmed Tinubu and the APC in order to justify the ongoing plan to sack Prof. Jega so he won’t organize the elections,” he said.