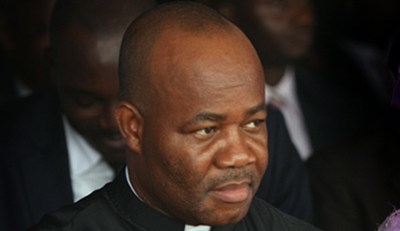 Governor Godswill Akpabio of Akwa Ibom State has dismissed claims that he obtained N600 billion loan to run the affairs of the state, saying the state only got N80 billion facility

The governor, however, said he had repaid about N30 billion of the debt, leaving the state with only N50 billion debt. He pledged to further reduce the debt to about N45 billion before leaving office on May 29.

Akpabio blamed the news of indebtedness on the opposition, which he said was bent on deceiving the people in order to get political power.

He said with the signing into law of the Freedom of Information Bill by President Goodluck Jonathan, those who genuinely needed information about the state’s finances could easily approach the state Ministry of Finance for details rather than being caught in the web of lies on social media.

“When we realized that the economy was going down in 2013, we decided to go for the first loan, and all we have borrowed as a state amounts to N80 billion…”