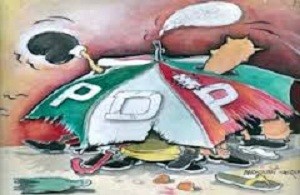 Following the exit Chief Obasanjo, PDP in Ogun state have been going through power tussles as two members of the Peoples Democratic Party in Ogun State have dragged the Peoples Democratic Party senatorial candidate for Ogun East Senatorial District, Buruji Kashamu, before the Federal High Court sitting in Abeokuta, asking it to disqualify him from contesting in the March 28 presidential and National Assembly elections.

They are asking the court for an order of interlocutory injunction restraining the Independent National Electoral Commission from recognising Kashamu as the candidate of the PDP for Ogun East Senatorial District in the forthcoming National Assembly elections.