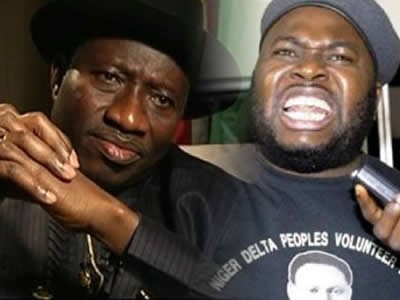 In a remarkable change of tone, ex-militant leaders from the Niger Delta zone who had threatened mayhem if President Goodluck Jonathan was defeated in the forthcoming presidential election, yesterday pleaded with Nigerians to vote to re-elect the incumbent president. They suggested that Mr. Jonathan be returned to office based on what they described as the noticeable achievements of his administration, noting that the opposition All Progressive Congress (APC) had waged a campaign of hate against the president.

Speaking as members of the Leadership, Peace and Cultural Development Initiatives (LPCDI), the ex-militant figures stated that, though the media campaign against President Jonathan was filled with hatred and deceit, the Nigerian voters should support the president’s re-election based on the achievements of his administration in the areas of education, power, infrastructural development and security.

The ex-militants issued their new toned-down endorsement of Mr. Jonathan at the end of a meeting presided over by the group’s national coordinator, Reuben Wilson, popularly known as General Pastor Reuben. The meeting was held yesterday in Yenagoa, the capital of Bayelsa State. The group called on voters to focus on Mr. Jonathan’s performance instead of the rhetoric of hate against his administration.

Briefing reporters on the outcome of their meeting, Mr. Wilson said, “we resolved to call on Nigerians, particularly eligible voters, to rate the candidates for the presidential election based on performance and eligibility. President Goodluck Jonathan has done well and he should be voted in by Nigerians for [a] second term. They should assess him based on performance and not the region he comes from.”