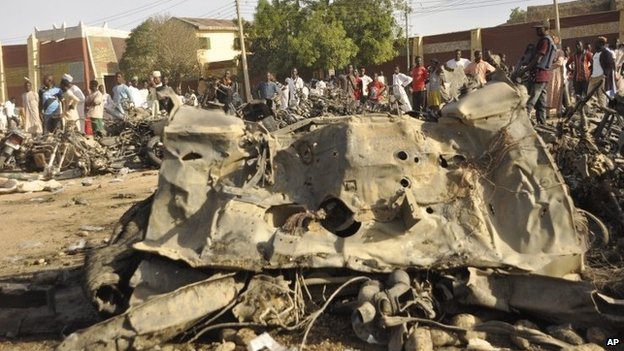 Following the three bomb explosions at the Kano central mosque today, rescue official, speaking to Agence France-Presse, put the casualty toll at 64 dead and 126 hurt, although this has not been independently confirmed.

Aside the three bomb explosions, the attackers also turned gunfire on worshippers, firing randomly at people.

One eyewitness told the BBC’s Focus on Africa that “The imam was about to start prayer when he saw somebody in a car trying to force himself into the mosque. But when people stopped him, he detonated the explosions. People started running helter-skelter.”

BBC Hausa editor Mansur Liman said one witness at a local hospital had described the scenes there as being the most horrible he had ever seen.

Today’s attack is assumed to be targeted at  Emir Muhammad Sanusi II, who has criticised Boko Haram barely a week ago, urging civilians to take up arms against the group. However, the Emir who has been said to be a regular worshipper at the mosque was out of the country during the attack, leaving the assumption ineffective.