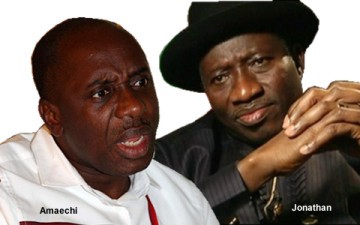 Former Aviation Minister, Femi Fani-Kayode , has urged the federal government to query Governor Chibuike Amaechi of Rivers State for his recent media remarks where he allegedly said the opposition would form a parallel government if President Goodluck Jonathan won the 2015 presidential election, saying that such statement amounts to treason.

Fani-Kayode who made the call Friday in a press conference in Umuahia , Abia State, after his two-day visit to the state also expressed disappointment over the commotion at the National Assembly complex on Thursday, accusing the lawmakers of breaking the law and disgracing the country.

The former Aviation boss said “some public figures may shy away from speaking the truth but I will not, no matter whoever is involved .”

“Legislators took the law into their own hands. Broke down gates, jumped through the gates, fought the police and created commotion and shameful acts.

“If this were to be in any other country particularly America or Uk that for whatever reasons a line was drawn by the police and security agencies, and individuals no matter how high or how much respected or loved chose to defy them and cross the lines, injured some policemen ( because the IG told me on phone this morning that some police men were injured), and they defied the police , went through the tear gas, and ignored the warnings , the police would have been forced to use a very high degree of force.