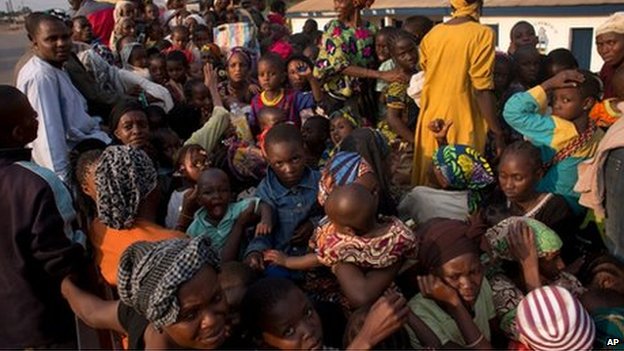 Forty nine innocent little boys were butchered by Boko Haram in their schools on 10th November 2014 as they resumed class in Yobe state. The question must be asked: is there any limit to the depravity of these monsters and those that secretly support and encourage them?

I may not know much but one thing that I know is this: the spilling of innocent blood has terrible consequences for both the land on which it is spilt and for those that spill it. I am talking about long-term generational consequences.

This is the more so when that blood is the blood of children. Our girls are kidnapped from their schools, abducted, raped, married off and sold into slavery and we call ourselves blessed.

Our little boys are bombed to smithereens in their schools, their young lives are snuffed out, there is no sense of outrage and no-one is brought to book yet we call ourselves blessed.

Our level of sensitivity has been seared to a point that we don’t care anymore and we are no longer moved when we hear about the horrors being inflicted on our people yet we call ourselves blessed.

When will we appreciate the fact that there is something fundamentally wrong with us? I had every reason to feel so sad on the day that the news from Yobe came but my initial sadness was quickly overwhelmed by a deep and burning rage.

I was (and still am) enraged by this latest act of pure evil and I condemn it in the strongest terms. When I told Nigerians three years ago that Boko Haram and their secret sponsors and friends had to be crushed like vermin even if it meant wiping out whole communities that secretly supported them virtually everyone said that I was wrong.

Many within and outside government counselled that we ought to adopt a ”softly softly” approach towards them and disregarded my counsel. They even subjected me to insults and ridicule for taking such a strong stand and such a hardline at the time.

Yet unlike them I saw the evil behind Boko Haram long before it fully manifested and I recognised it for what it was right from the start. Few others did.

The saddest aspect of it all is that even now most Nigerians still can’t see or feel that evil despite the daily bombings, killings, abductions and kidnappings.

The truth is that until Boko Haram takes over the entire north and knocks on the gates of the south Nigerians will continue to act as if the whole thing is no big deal and that whatever atrocities that Boko Haram commit really doesn’t matter. That is how short-sighted, insensitive, depraved and ignorant we have become.

We are a people that have no conscience and we no longer care when our citizens are treated like filth or slaughtered like flies. There is no other country and no other people in the world that suffers from our particular type of affliction. We are suffering from a strange disease.

Nigeria is not blessed, she is cursed and she is in dire need of deliverance. If we were not cursed how can we act as if all is well and how can we be normal after 49 of our school children were bombed to death in one fell swoop.

This single outrageous and horrendous act is enough to traumatise most nations and most people for the next ten years, but not us. Most of us are indifferent: we shut it out and act as if it never happened.

We are a strange land of strange men and women. We are a land where the nepthalim hold sway. We are a land that enjoy to watch others suffer injustice, persecution and wickedness and where the youth would rather rant on facebook and twitter than risk their lives by marching on the streets and demanding change.

We are a land that claims to love God but that does everything that is contrary to His counsel and His will. We are land where brother eats sister and where sister eats brother. We are a land where parents trade off the future, the destiny and the glory of their own children for a pittance and where men sell their souls to the devil for fame, power and wealth.

We are a land where children are killed and maimed, where women are dehumanised and turned into desperate harlots by virtue of the circumstances in which they are forced to live and where evil is nurtured, encouraged and glorified.

We are a land that continues to dance, to make merry and to rejoice even as it’s weakest and most vulnerable citizens are butchered and even when it’s very own children are slaughtered like christmas turkeys and sallah rams. I see all this and I say shame on us all: from the highest to the lowest we have all failed. From the pauper to the prince and from the servant to the king we are all guilty.

Our hope and salvation lies in one thing and one thing alone: the love of the Lord God of Hosts, the mercy of the Ancient of Days and the grace of the Living God. I have little doubt and abundant evidence to prove that He still loves us despite the evil that is inherent in us.

If we repent and call on His name He shall deliver us from our fanciful and destructive delusions, our manifest and inexplicable greed, our insatiable love of money, our obsessive lust for power, our glorification of all that is ungodly and evil and our shameless self-hate and He shall make us whole again. His love for us is never ending: it remains faithful and true and it is as constant as the northern star.

As a matter of fact it is by the power of that love alone that we have not fallen over the brink and totally destroyed ourselves by now. It is by His grace and mercy that we have not suffered or experienced a Rwanda-type genocide in our shores or walked on the road to Kigali by now.

A couple of weeks back a courageous Canadian soldier was killed by an insane terrorist who stormed the Canadian Parliament and who held their political leaders hostage until he himself was killed. The whole world rose up and condemned this callous act and rightly came to a standstill.

Most importantly the Canadian government and people honored the dead and paid him tribute after tribute. It was very moving and highly appropiate. That soldier deserved no less. Everyone in Canada, and indeed throughout the civilised world, was talking about it and people were very sad.

That is how normal people and normal countries are meant to react to such things and that is how sane and civilised people are expected to behave. Yet in Nigeria it is not so. In this country hundreds of our people are slaughtered in 100 different ways and abducted every week and there is no sense of panic or alarm.

There are no tears, there is no urgency, there is no passion, there is no anger, there are no demonstrations or demands for those that commit this evil to be brought to justice, there is no support for our security agents and military, there is no sense of national outrage and most important of all there is no genuine empathy or sympathy for the victims and casualties of terror even though most of them are women and children. It is just business as usual and our nation is flying on auto pilot. Let us hope and pray that we don’t eventually go into free-fall and crash.

May the souls of the 49 young boys that were murdered in cold blood by a Boko Haram suicide bomber in their school on 10th November 2014 rest in perfect peace. May God forgive us for our sheer insensitivity, wickedness, selfishness and callousness and may His love never depart from the shores of our nation.