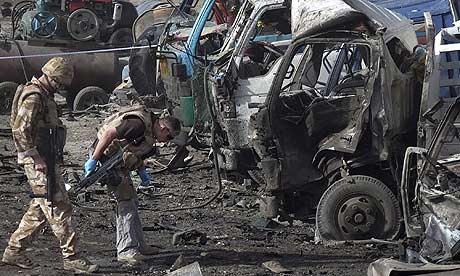 An improvised explosive device fixed to a motorcycle has exploded in northern Afghanistan, killing at least six people, a local official has told Al Jazeera.

“At least two women and four men were among the dead. At least six other people were injured in this attack,” said Al Jazeera’s Charles Stratford, reporting from Kabul.

It was not immediately clear who was behind the attack.

The blast came a day after a suicide bombing at a volleyball tournament in Paktika province killed more than 60 people.

Our correspondent reported that the Afghan security forces accused Haqqani network for the Paktika attack. The network operates predominantly from across the Pakistani border.

“The intelligence agency here said the suicide bomber was operating under control of what it describes as a shadow Haqqani network,” said Stratford.

The Haqqani network, which was designated a terrorist organisation by the US in 2012, has been blamed for large-scale attacks on government and NATO targets across Afghanistan as well as for many kidnappings and murders.