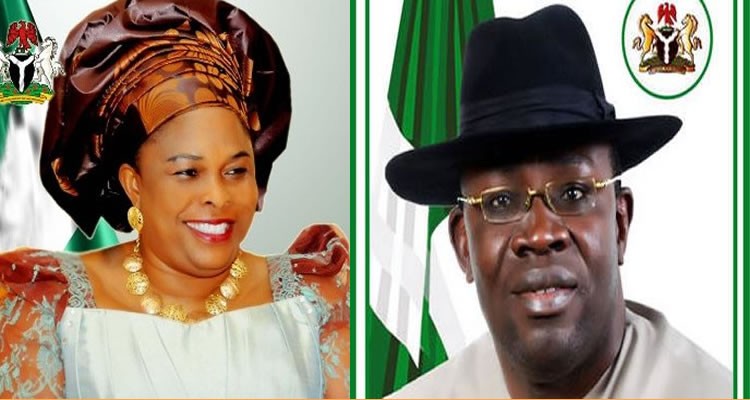 There is strong indication that the rift between the wife of the President, Dame Patience Jonathan, and Bayelsa State Governor, Seriake Dickson, has deepened.

It was learnt that Bayelsa senators and members of the House of Representatives at the National Assembly had allegedly joined forces with the First Lady against Dickson.

The federal legislators, it was learnt, had formed a strong alliance to counter moves by the Governor and his loyalists to deny them reelection in 2015 through zoning allegedly orchestrated by Dickson.

The aggrieved lawmakers, it was further learnt, had backed the moves by Mrs. Jonathan to replace Dickson with her loyalist in 2016.

The governorship election will take place in 2016.

Recently, it was gathered that some of the senators allegedly held separate meeting with President Goodluck Jonathan and the First Lady in a bid to perfect strategies to outsmart Dickson to get the Peoples Democratic Party tickets for 2015 general elections.

The governor has been locked in the battle of wits with the lawmakers following their interests  to return to the National Assembly for second and third terms.

The governor’s camp was said to have through stakeholders’ meetings arrived at decisions to zone the National Assembly positions for the sake of equity, unity and peace.

The development, has undoubtedly created some cracks in state chapter of the PDP resulting in the holding of parallel congresses by the Federal lawmakers to counter moves by Dickson’s loyalists.

It was gathered that following the development that played out during the congresses, Dickson was angry, particularly the alleged plots by Mrs. Jonathan to work against his return in 2016 in addition to the gang up by the national lawmakers to have their way.

The visit last week of the First Lady to the state provided an opportunity for the federal lawmakers to make bold political statement to Dickson’s camp.

At the Samson Siasia Stadium where the President’s wife had gone to distribute empowerment items and cash to Bayelsans under the auspices of the Millennium Development Goals, all the three senators representing the state were in attendance but Dickson was absent.