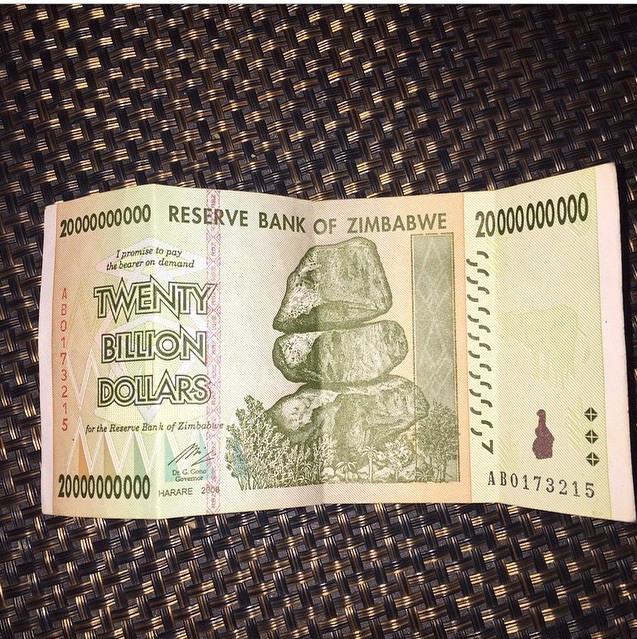 As Nigerians we complain daily about how high the dollar rate is to the Naira and many of us wish someday we would get to see the dollar stand at one Naira to 2 Dollars and probably 3 Pounds to one Naira . But while we still wishing and hoping it happens a fellow African country in the name of Zimbabwe has 2o Billion dollars enveloped in one note and to clear your doubts it is not as worthy as the American dollar it is actually worth 1 US Dollar to 361.900 ZWD so you can expect that 20 billion dollar to be less than 100 dollar which would be about 15,000 Naira approximately .

The Zimbabwean dollar (sign: $, or Z$ to distinguish it from other dollar-denominated currencies) was the official currency ofZimbabwe from 1980 to 12 April 2009, with three periods of inflation.

Although the dollar was considered to be among the highest-valued currency units when it was introduced in 1980 to replace the Rhodesian dollar at par, political turmoil and hyperinflation rapidly eroded the value of the Zimbabwe dollar to become one of theleast valued currency units in the world, undergoing three redenominations, with high face value paper denominations, including a $100 trillion banknote. The third redenomination produced the “fourth dollar” (ZWL), which was worth 1 trillion ZWR (third dollar), or 1025 ZWD (first dollar).

Despite attempts to control inflation by legislation, and three redenominations (in 2006, 2008 and 2009), use of the Zimbabwean dollar as an official currency was effectively abandoned on 12 April 2009 due to the skyrocketing inflation. According to some sources, a person would starve on just a billion Zimbabwe dollars.This was a result of the Reserve Bank of Zimbabwe legalising use of foreign currencies for transactions in January 2009.

Currencies such as the South African rand, Botswana pula, pound sterling, Indian Rupee, euro, Yuan and the United States dollarare now used for all transactions in Zimbabwe; the policy of the government of Zimbabwe has insisted that any attempts to reintroduce Zimbabwean currency should be considered only if industrial output improves.

And we remember there was a time when we almost introduced a 5000 Naira not that was kicked aside because Nigerians saw it as an avenue for inflation to increase and more Naira notes to be carried but in larger denominations.Guess it was a brilliant decision taken then . But can our economy ever get this bad that we would need 500,000 naira in one note ? drop your comments below ……