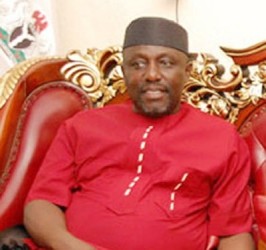 A prophecy concerning who will govern Nigeria come 2015 claims that Imo State governor,  Owelle Rochas Okorocha, will become the President of Nigeria.

Read what the General Overseer of Galilee Christian Center in Lagos, Prophet Williams, said during an interview with Daily Sun;

“In 2011, I saw in a vision that the present governor of Imo State Owelle Rochas Okoro­cha will be president in 2015. And in one of the national dailies recently, the governor said he would be president in 2015 and that it had been prophesied. True. I had seen this vision, but there are things that needs to be done before this prophecy can come to pass and one of them is that only a running mate from the South West region can give him the presidency.

“I have never met the governor before. When he said last week in the papers that he would become president in 2015 and that it had been prophesied, I was not surprised. What I saw in 2011, the governor said in 2014. God is truly wonderful.”