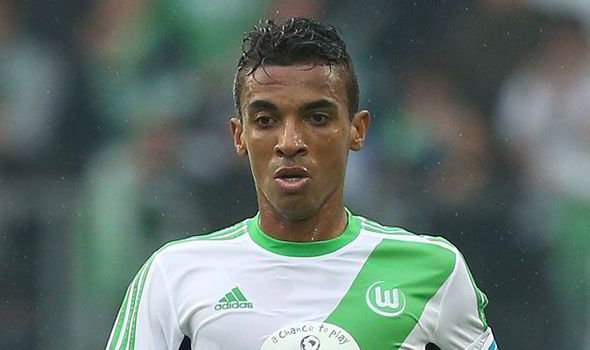 Arsenal reportedly have just £20 million to spend in the January transfer window. The inevitable question on the lips of many Gunners is who should the club sign with the funds available? Should they go for a one swoop for a player that can deputise in defence and midfield?

For the above sum and the current need of the team a signing in the mode of Brazilian and Wolfsburg defensive midfielder Luis Gustavo could fit the bill of what the club needs.

The 27 year old is a versatile midfielder who can play as a central defender as well as his orthodox midfield role. He has a past history of playing in central defence during his time with Bayern Munich.

His signing would mean Arsene Wenger would not have to worry about usurping the partnership of Per Mertesacker and Laurent Koscielny, while the Brazilian midfielder would slot in when he is needed in either roles.

With the way Arsenal’s season has gone so far, the club needs an experience signing. And Gustavo fits the experience criteria in many ways, his years as a midfielder/defender for Bayern Munich coupled with the fact that he is a Brazilian international means he has the requisite experience to hold his own in an Arsenal shirt.

Incidentally, the £20 million pounds that is being mooted as the transfer kitty available to Arsenal, is exactly what it would cost to sign him in January.

In addition, he would not be cup tied come January, as Wolfsburg are involved in the Europa league which means he would be free to take part in the Champions League knock out stages.

The Brazilian has previously been a target for Arsenal. In the summer of 2013 prior to his departure from Bayern Munich, he was on the verge of joining Arsenal, but according to reports, a lack of assurance whether he would get enough playing time in a season leading to the World Cup, meant he joined fellow bundesliga side Wolfsburg instead of Arsenal.

With the club’s present need, the Brazilian is the kind of player that Arsenal could do with, not just for his versatility, but for his experience, as there is a distinct lack of experience running through the current Arsenal lineup, and the players are too nice sometimes, which makes them shy away from tackles most of the time. Something the Brazilian can remedy because one of his strong attributes, is his tackling ability.

With the priority premised strictly on the signing of a central defender, the position of a defensive midfielder should not be discountenanced; a player like Luis Gustavo would suffice for the club in January. And he could slot into the set up at the club just like a certain Gilberto Silva did during his time at Arsenal.