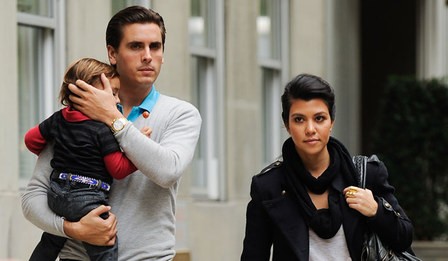 Kourtney Kardashian has had it with Scott Disick’s hard-partying ways, and she made that very clear on the Nov. 2 premiere of her new spin-off show, Kourtney & Khloe Take the Hamptons.

After presenting her longtime boyfriend and thDisick didn’t take her threat seriously, but he should have. Returning home from a night out, he discovered that Kardashian had told the guards to keep him away. “I know Kourt can be a little extreme, but not being allowed on the property?” he told the cameras incredulously. “I’m being told by security I can’t come into the home I’m living in? This is a bit ridiculous.”e father of her two (soon-to-be three) kids with an ultimatum — stay home or stay away — she banned him from their summer house, telling the guards to keep his car from driving onto the property.

The conflict began when the pregnant reality star, 35, told Disick she wanted him to cut back on both his drinking and his paid nightclub appearances. “What kind of life do you want?” she asked him. “You can’t have both. You need to pick one.”

Disick, 31, responded by saying that “a lot of people” have both family and an active nightlife, to which Kardashian replied, “Great. Go hang out with those people. Go find a sloppy, drunk girlfriend. You need to face the facts. If you want to die, then you can continue to act this way.”

Later, when she asked him to build a table they’d bought for son Mason, 4, and daughter Penelope, 2, he deferred, saying he wasn’t the “right man” for the job. “I don’t read, I don’t write, I don’t build,” he told her. “I make you kids. That’s the only thing you care about in life anyway.”

He also complained that she didn’t previously have a problem with his man-about-town ways, prompting her to point out that a lot had changed over the years — except him, that is. “You haven’t evolved,” she told him. “It’s humiliating, embarrassing, pathetic. I think if you go to the city you should just stay there.”