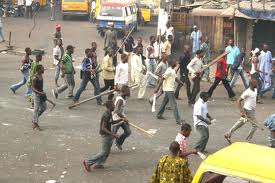 Barely 48 hours after violence erupted in Oke-Ado area of Ibadan in Ibadan South-West Local Government area of Oyo State during which a police officer was killed and others injured, Popoyemoja, Born Photo area, an hinterland of the state capital in the same local government area was set on fire on Sunday.

In what was described as reprisal attack, the house belonging to the late father of the former Oyo State Governor, Rashidi Ladoja, Yunusa Ladoja was among the several houses vandalized by people suspected to be political thugs.

Alongside the houses vandalized were several shops which were razed as well as vehicles, tricycles and motorcycles at ‘Born Photo’, ‘Iyana Asuni’, ‘Ile –eja’ and part of ‘Gege’ area, all in Ibadan.

As at press time, a house located at the main junction of ‘Iyana Asuni’ was still burning while men of state fire service were battling to put it off.

Owner of popular ‘Born Photo’, an octogenarian, who was an eyewitness, told Daily Independent that the political thugs who did the damage were also armed with weapons including guns and they were just damaging anything in sight.

According to him,” someone just called me this morning to tell me that thugs had invaded my shops and by the time I got here, I met the doors and glass planes as well as some finished photos damaged just as I was told that the thugs were reportedly armed to the teeth’’.

The house of the late Ladoja located at ‘Born Photo’ junction had the window planes and the doors damaged, a development the media aide to the former governor Ladoja, Lanre Latinwo described as unfortunate.

At Iyana Asuni junction, a filling station was vandalized, although security operatives were already stationed at the station as at press time.

Carcasses of burnt vehicles, tricycles and motorcycles were seen at the Idi-Arere/Born Photo major road when our reporter visited the scene of the incident.