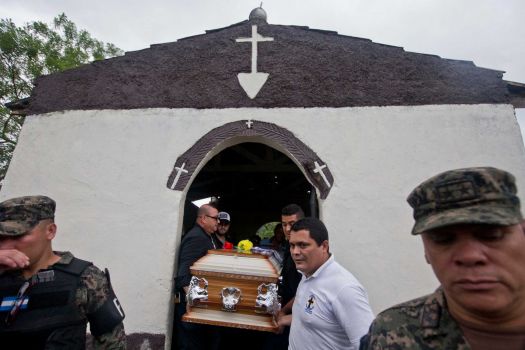 Grieving family members laid to rest a beauty queen and her sister amid drenching rains Thursday, pleading for divine justice after the women were shot to death in what police say was a jealous rage by the sister’s boyfriend.

Miss Honduras, 19-year-old Maria Jose Alvarado, and her sister Sofia, 23, were interred in two cement graves at a tiny cemetery in this hamlet north of their hometown of Santa Barbara. About 300 people, including mourners and security forces, trudged through the mud for the ceremony.

The bodies had been delivered to the family home before dawn, but a sustained downpour prevented the graves from being dug for hours. Their mother wept as she kissed the two caskets adorned with flowers. Maria Jose’s coffin was also draped with her beauty queen sash.

“We are going to miss you; you will live in our hearts forever. You have gone to reunite with our father in heaven. He awaits you and will care for you there,” said 26-year-old Corina Alvarado, the victims’ elder sister. “Only God can punish those killers as they deserve.”